THE DAY THE EARTH ROSE UP 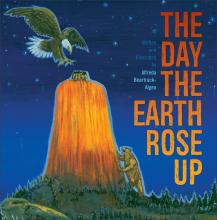 A Lakota author’s version of how the Pleiades, the Seven Sisters star formation, came to be.

When seven Lakota sisters venture deep into the forest to gather chokecherries, they are surprised and chased by a giant bear. As they huddle together on a rock ledge and pray for help, the earth rises up, taking them out of reach of the bear. A great eagle rescues the Seven Sisters by taking them to the Star Nation, where they become the Pleiades star formation we see in the night sky.

Beartrack-Algeo’s. . . long fascination with the Pleiades constellation led to this star-studded origin story, her solo debut. Alongside jewel-toned paintings that foreground the natural world, Beartrack-Algeo incorporates many traditional elements in this picture book about “how everyone and everything is interconnected. What is sacred above, is sacred below.”

Beartrack-Algeo’s love and pride of her (Lakota) culture and the land shines throughout the story, which is a great addition to most myth and legends collections, especially given the scarcity of books featuring indigenous peoples.

AUTHOR
Alfreda Beartrack-Algeo, a storyteller and poet, artist and illustrator, is a member of the Lower Brule Lakota Nation, Kul Wicasa Oyate, in Lower Brule, South Dakota, where she grew up. Her involvement in fine art began at an early age, with direct influence from her father, Alfred Ziegler, a noteworthy artist who has inspired her work in sculpture, painting, and drawing throughout her life. Alfreda currently lives in beautiful Palisade, Colorado, with her spouse, David Algeo.