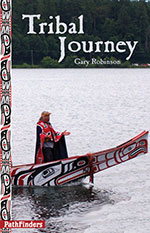 Robinson was awarded the Best Animation award for his short film "We Are All Related" at the 40th Annual American Indian Film Festival hosted by the American Indian Film Institute in San Francisco, California Nov 14, 2015. Robinson was the Writer, Producer, and Director of the film. The film is available for viewing on the NativeFlix website: nativeflix.com.

He is the author of eight PathFinders novels: Thunder on the Plains, Tribal Journey, Son Who Returns, Little Brother of War, and the Billy Buckhorn Trilogy: Abnormal, Paranormal, and Supranormal.  His recent novel, Standing Strong about a young water protector finding her path and dedicating her life for the greater whole, was chosen by American Indians in Children's Literature as Best Book 2019.

Recently Arrived: a new title in our Native Trailblazers series, Native Actors and Filmmakers: Visual Storytellers, and in our children's collection,  Be Your Own Best Friend FOREVER! featuring his niece Jayla Rose, which is in its third printing!

Listen to Literal app conversation with Gary on Spotify here.

"Gary Robinson is a writer whose work has always demonstrated his understanding of Indian country and the issues facing our youth. This new story, however—of a disaffected young Blackfeet woman whose friend has just taken her own life—lifts his message to a new level.
All too often these days, young men and women in our reservation communities see no way out other than suicide. It’s a blight that occurs today among Native American kids in epidemic proportions. Rhonda Runningcrane, Robinson’s protagonist, is painfully real and her odyssey to find meaning in her life is equally believable. Robinson also uses her journey toward balance and self-discovery to deftly bring in one of the major issues facing not just Native communities but our nation as a whole.
The fact that this tightly constructed short novel does not conclude with a storybook total victory makes it even more real and, because Rhonda does not give up, inspiring. This is the kind of story that every native teenager should have the chance to read. I strongly recommend it — not just to every tribal library (where sets of it should be available)—but to YA audiences everywhere."
— Joseph Bruchac