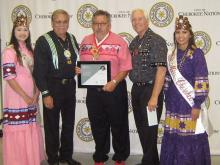 Jesse T. Hummingbird, 3/4 Cherokee and tribal member of the Cherokee Nation, was born in 1952 in Tahlequah, OK. This Cherokee artist has won awards for his paintings at major shows across the country. He won the best of division for painting at the Heard Museum Indian Market; second place in painting at the SW Arts Festival in Indio, CA.  In 2017, he was selected by Cherokee Nation as a Cherokee National Living Treasure.

In 1996 he was named artist of the year by the Indian Arts and Crafts Association and received a fellowship from SWAIA that same year. Jesse was featured in an article in the 1999 fall issue of Native Artist magazine. Interviews and his images have been featured in several published books.

Jesse painted in the traditional flat style of the Oklahoma Natives with acrylic on canvas for his bright contemporary original paintings. His subjects are without modeling or contour, have no shadows or shading of color, but have in lining of all colors. The geometric faces in his paintings are an outgrowth of his popular mixed media masks.