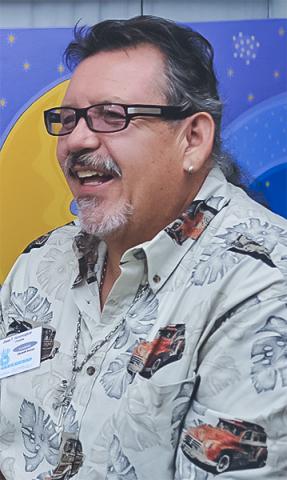 We join in mourning with the loss of Cherokee National Treasure, Jesse T. Hummingbird, artist & friend.

Jesse painted in the traditional flat style of the Oklahoma Natives, using vivid colors and distinct lining to create magnificent art, masks, and so much more. He has won numerous awards and distinctions. In 2017, he was given the honor of Cherokee National Living Treasure for preservation of Cherokee art, language, and culture.

With his wife Sandy, they created five children's activity books.

Jesse was working on another children's book, "Don't Step on Me" with Alfreda Beartrack-Algeo, which will be published post-humously.

We raise up our prayers for Sandy, their family and friends. You will be greatly missed.

Read more in his obituary.

Gary Robinson (Cherokee/Choctaw descent) has this to say about Jesse:

Honored nationally by many in the world of art and recognized by his Cherokee tribe as a cultural treasure, Jesse Hummingbird was loved by all who knew him, and deservedly so. The depth of his giving soul was apparent to anyone who worked with him or interacted with him however briefly.

I had the honor and pleasure of meeting Jesse and seeing his work in about 2007 at the Autry Center’s Native American Art Market in Los Angeles when I was searching for just the right artist who could exquisitely visualize my Native American Night Before Christmas text. Jesse’s imaginative, colorful illustrations, of course, exceeded my wildest expectations, and graced the pages of this sequel volume, Native American Twelve Days of Christmas.

However, the years 2020 and 2021 were not kind to this kind man. He powered through a broken back and a bout with cancer, but succumbed to gastric complications on June 17, 2021. His wife, Sandy, said, “My heart is broken, but I too will power on as I promised him.”

Born in Tahlequah, Oklahoma, this ¾ Cherokee became a fulltime artist in the early 1980s, using a traditional “flat-style” made famous by earlier Native Oklahoma artists. Through the years, Jesse won the hearts of art collectors all over the United States and won awards from multiple art museums, markets and shows.

In 2015, Jesse was named a Tribal Elder by the Cherokee Nation, and in 2017, a National Treasure, an honor given by the tribe to those who are helping keep Cherokee art and culture alive.

“People who met Jesse at one of his art shows remember his smile, laugh, stories and easy way of talking to them…sometimes forgetting to try to sell them something!” Sandy said of her husband. “Artists and friends admired his work and respected him for staying true to his art and his Cherokee roots. He is remembered for his willingness to always help someone in need… sometimes without their asking for it. He will be missed by all who knew him.”