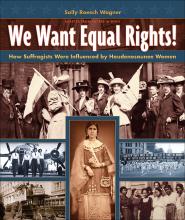 The publication of this book coincides with the 100-year anniversary of the passage of the 19th Amendment giving women the right to vote.

We Want Equal Rights! is the story of remarkable women who laid the foundation for the modern women’s movement and the American Indian nation that proved equality was possible. In 1850, these brave women challenged a culture that believed they were inferior to men. How did they envision such a world? They looked to their neighbors the Haudenosaunee (Iroquois) and saw how women were held in high regard, with even greater rights than men.

At that time in the United States, a woman was considered subservient to her husband, who gained all his wife's wealth upon marriage. Women had no claim to their children and were considered runaway slaves if they left an abusive man. In contrast, Haudenosaunee society provided a shining example of what is possible when women are treated with respect. Read how early activists forged a path to women's equal rights using the ideals of their Indian neighbors.

Feminist pioneer SALLY ROESCH WAGNER, PhD, is a nationally recognized lecturer, author, and storyteller of the history of women’s rights. A founder of one of the country’s first college women’s studies programs (California State University, Sacramento), and has taught women’s history for forty-eight years. She currently serves as adjunct faculty in the University Honors Program at Syracuse University and St. John Fisher’s Executive Leadership Program.