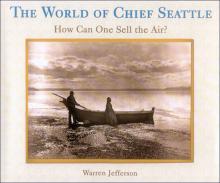 Chief Seattle, in his youth a great war chief, became an advocate for peace and friendship with the white settlers of Puget Sound, Washington. He is renowned today for an eloquent speech given in 1854 during treaty negotiations with the U.S. government in which he expressed a hope for peaceful coexistence and advocated respect for the environment.

"The World of Chief Seattle" puts Chief Seattle’s life into the context of his time and gives a brief history of the region and its people, with particular emphasis on Chief Seattle’s tribe, the Suquamish. It includes the two best known versions of Chief Seattle’s speech and stories from the Suquamish themselves. Inserted as side bars through out the book are excerpts from interviews given by tribal elders talking about their lives on the reservation when they were children, their culture, and historical events.

As part of the research for this book Warren traveled to Suquamish land three times. While there he visited historical sites including the site where Chief Seattle lived for many years and where he died. He spent two days interviewing the tribal historian Marilyn Jones and allowed access to much of their tribal archives. "The World of Chief Seattle" was written in cooperation with Chief Seattle's tribe and they receive a portion of the royalties. Includes Chief Seattle's complete speech, with many rare 19th and early 20th century photographs of village life. Fifty photos, illustrations, maps

"Quietly optimistic in describing the Suquamish's former prosperity and how the tribe lives today."—Publisher's Weekly

"This book is very informative and research that went into the book shows that the author truly cared to show in the best possible light the lifestyle of Suquamish's most famous Chief. Chief Seattle has been quoted and misquoted so much over the years, that this book is a breath of fresh air. A great way to learn about Suquamish and a glimpse into history. I feel that this book is something that all ages will enjoy reading."—Marilyn Jones, Tribal Historian Suquamish Tribe